Posted on September 22, 2013 by londonmuralpreservationsociety

Apologies for the general quietness on the blog. We have been working away on lots of different things, trying to keep murals in their communities so that the next generation can enjoy them!

Back to the subject of the title! Spring and summer has been spent repairing and repainting the Stockwell Memorial Mural.  The mural is painted onto a rotunda that covers the entrance to one of south London’s deep level shelters. The last few years had seen an increase of deterioration particularly on the top part of the structure. There was also water damage from ineffective drainage causing the growth of moss and damage to the bricks and mortar. On close inspection it really was a sorry state.

So with a team of volunteers, original artist Brian Barnes and assistant Morganico, work started by removing flaking paint, filling holes and treating as much damage as possible. The first few sessions were in the snow as the end of March and proved to be exceptionally cold; we only lasted 30 minutes before we had to give up! Volunteers from the Friends of Stockwell War Memorial and Gardens were there week in, week out slogging away at all the work that needed doing.

In the Snow! (Photo: Ruth Miller)

Spring turned into summer. Paint scrapers were swapped for paint brushes. A scaffold went up around the structure and Brian and Morgan beavered away at the top part of the mural. More paint fell away from the surface and large sections had to be re-drawn. Slowly the patterns, faces and colours reappeared around the top part of the rotunda.

Six weeks later the scaffold came down. And the workers continued on the bottom. We held a paint a poppy day where young and old painted a poppy. More volunteers arrived rallied by the call of Naomi Klein of the Friends of Stockwell memorial and Gardens. She was a huge assistance to this repair helping pick up the paint from the supplier, rally the team and support the London Mural Preservation Society in making sure it all ticked over.

Lots of people popped down to visit the works as spring moved into summer and still the artists and volunteers pushed on with trying to finish the undertaking. From the extremes of the cold spring to the furious heat of the summer,  the volunteers were really asked to show their dedication.

Catherine, Nicola and particularly Saskia turned up again and again to support the work being undertaken.  The last push to get the remaining work done was encourage by Saskia as the last weekends of summer started to go and it was now a race against the approaching autumn and the potential for rain!

September came and Naomi and myself planned an opening event. The Mayor was invited to unveil a plaque to mark not just the repair of the mural but also the repair of the World War One memorial next to it. This was something important to local residents particularly to the families of those people listed on the memorial. 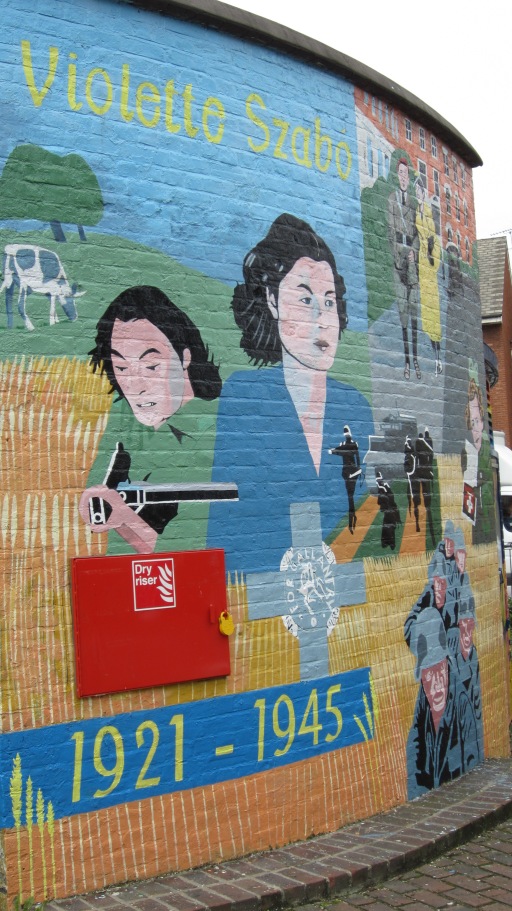 The finishing touches to the mural were added the evening before the event, the plaque was put up and everything was ready to go.

Saturday 14th September, the plaque was unveiled by the Mayor of Lambeth Cllr Mark Bennett who gave an interesting speech about the local history of the area and the memorial. A small crowd turned up either linked to the memorial or to the work on the mural. The rain held off though we could have sheltered under the gazebo kindly lent to us by the Brixton Society who also supplied some photos of what the area originally looked like.

It’s a good day when you know another mural enjoyed by the community has been repaired. Maybe it’ll even inspire some people to go and paint more murals.

The London Mural Preservation Society aims to bring murals created over the last 40 years back into the attention of the people of London and out further afield into the rest of the UK and the world.
View all posts by londonmuralpreservationsociety →
This entry was posted in London Mural Preservation Society, Restoration and tagged Brian Barnes, London, Mural, Restoration, Stockwell. Bookmark the permalink.