Posted on November 4, 2014 by londonmuralpreservationsociety

Earlier this year we were informed that girders had been placed across Ray Walker’s Bow Mission mural. We took a trip into the East End last week to assess the damage.

The Bow Mission Mural was the first solo mural designed and painted by Ray Walker. Created in 1978, it shows the activities of the local community in their daily lives. 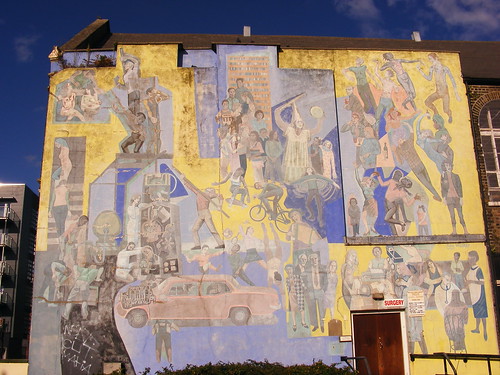 The mural is divided into different sections, each telling a different story, and is reminiscent of Renaissance church frescoes where each panel tells a separate tale. By comparing it to the Hackney Peace Carnival mural in Dalston, it is noticeable that Walker’s work moves from portraying many stories on one wall to creating a singular composition telling one story across the painted area.

This mural reveals something about the artist’s work and the local history of the area; however, its importance lies in the fact that it is Walker’s only remaining mural which he painted and designed as a solo artist. On visiting the mural, we can see two girders cutting across the top of the painting and the upper section has been painted out. Red filler has been used to seal the cracks on the render. 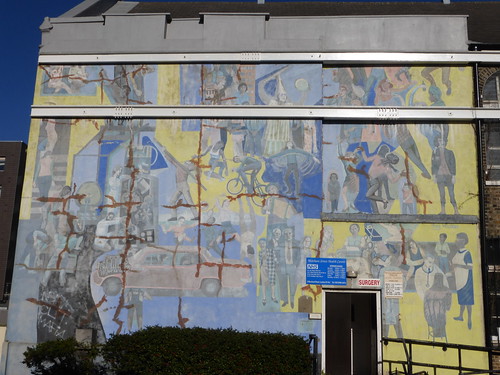 Although the damage is bad and it is unlikely that there is a simple solution to resolving the problem of having two girders across the composition, there is still the possibility of finding a positive outcome to repair what remains. We will investigate and keep you posted.