Posted on June 20, 2012 by londonmuralpreservationsociety

Well, it’s been over a week since we had the unveiling and we are still getting feedback about what a great mural it is. A huge thanks to all our supporters out there!!!

So I thought I should finish my story of when the sun stayed out so a mural could be painted! 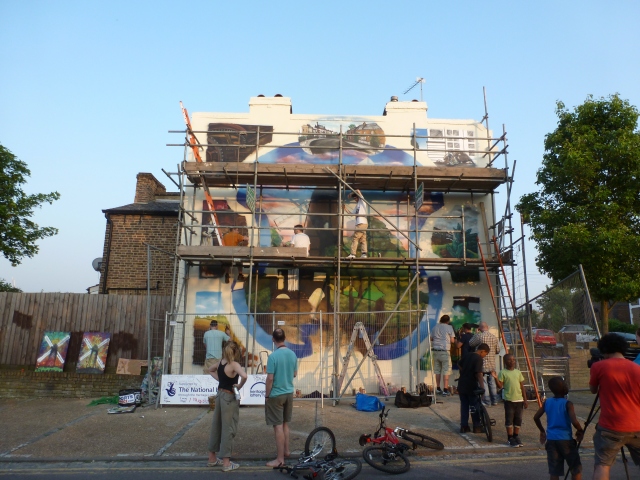 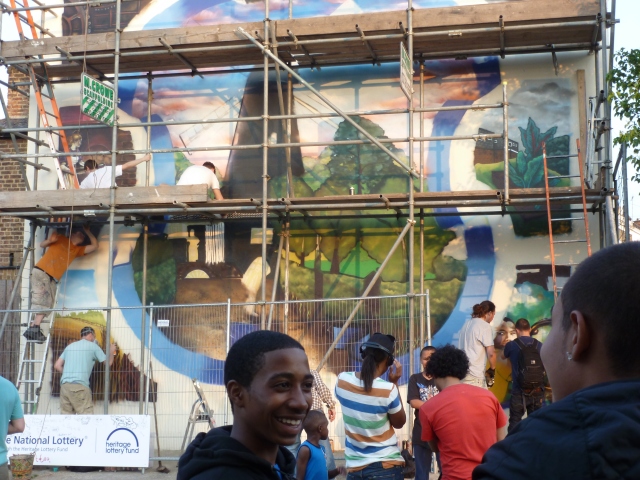 Jason, the boy in the mural, poses for a photo. 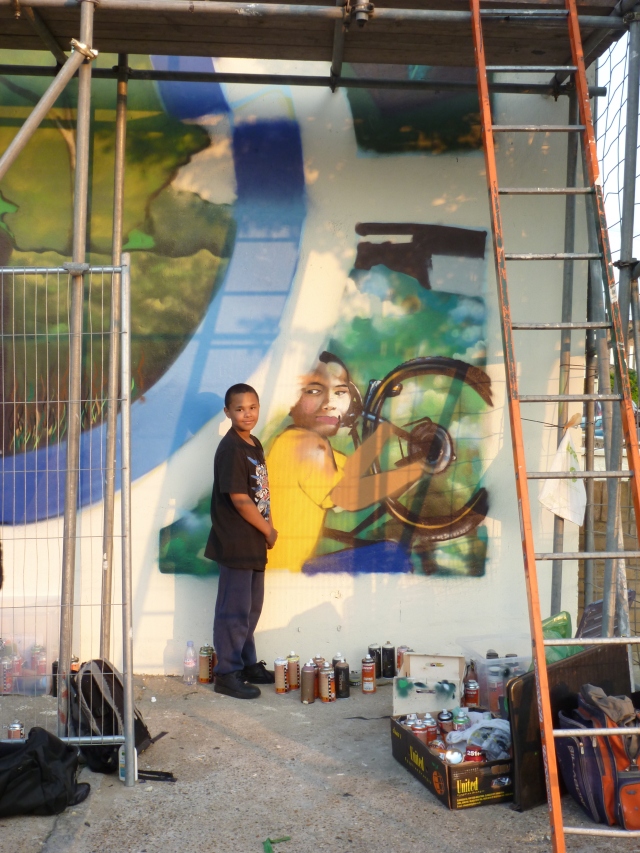 Working on the portrait.

Keeping an eye on the dogs! 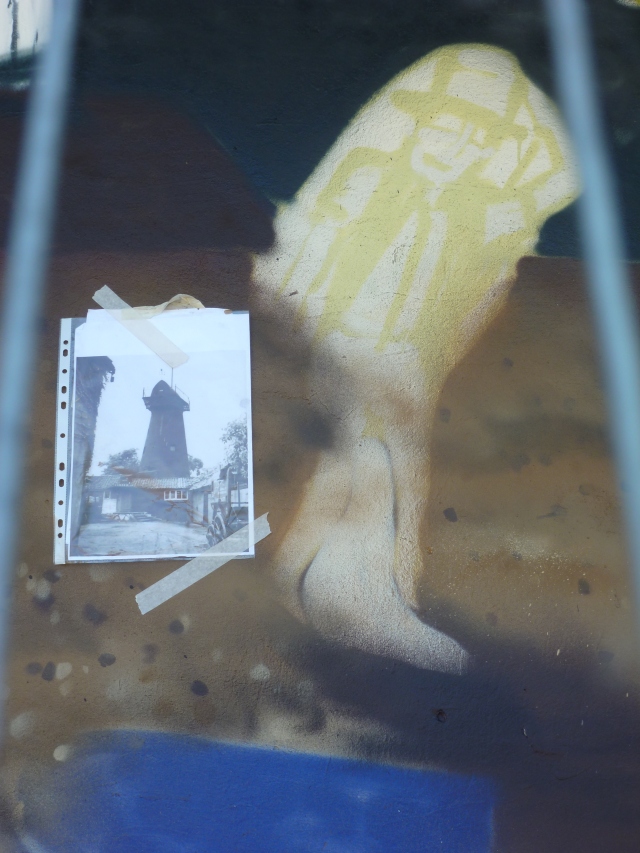 The windmill begins to appear! 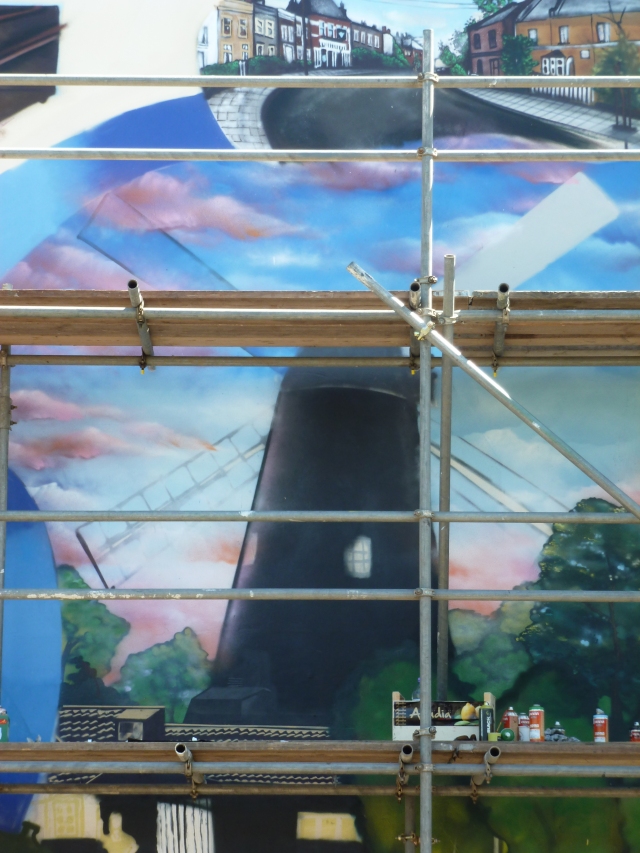 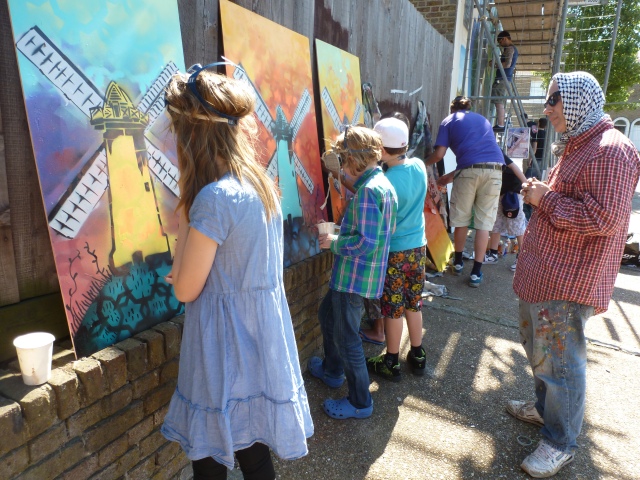 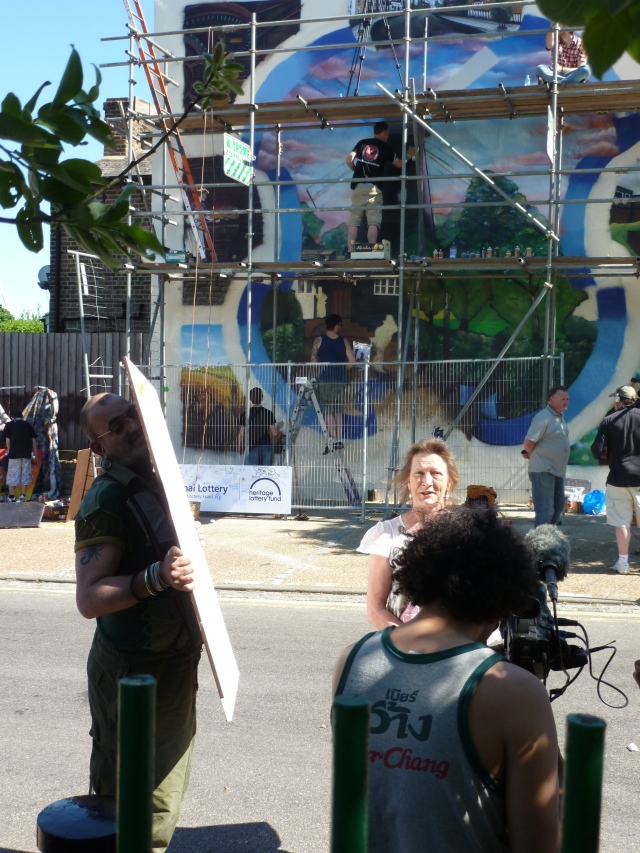 Working on the detail. 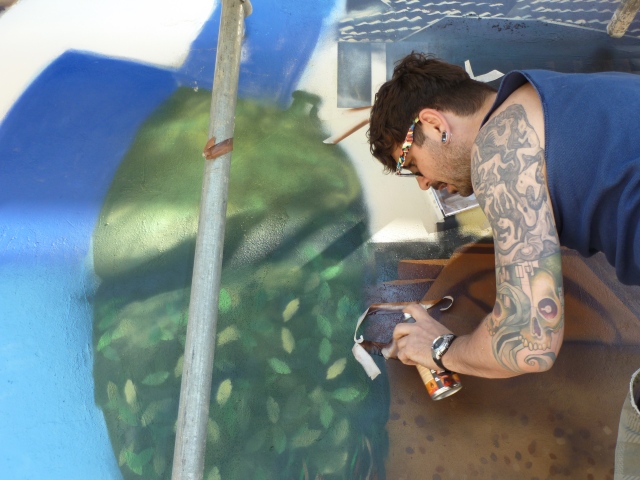 Posing for a photo. 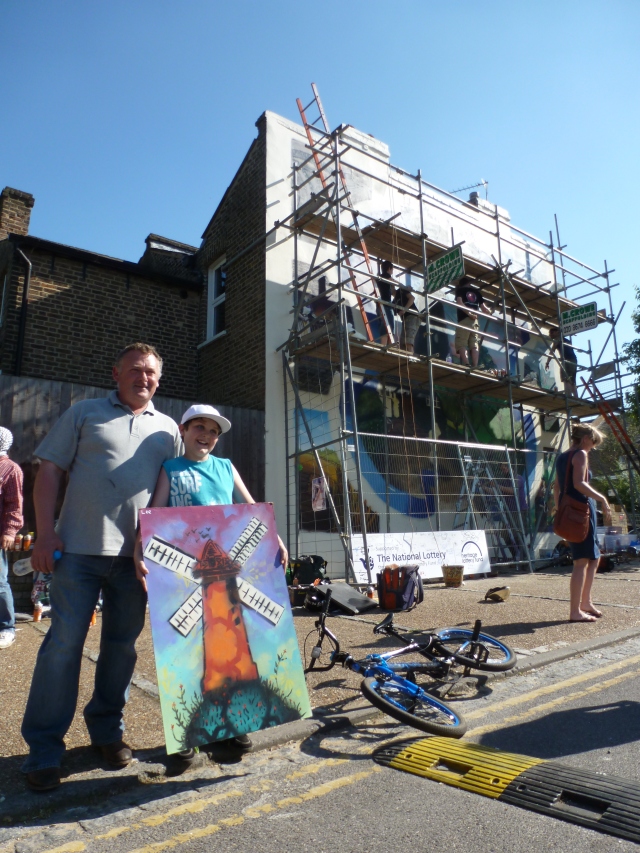 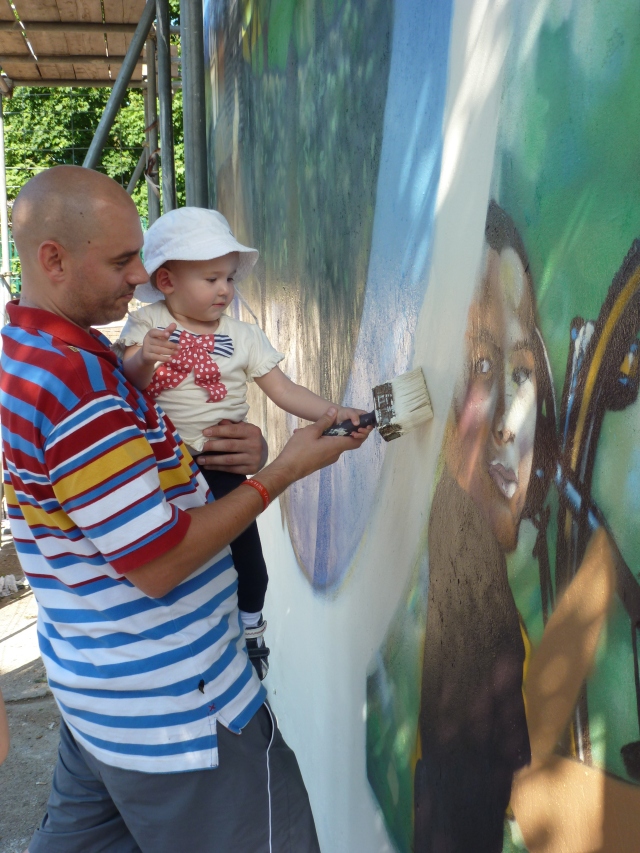 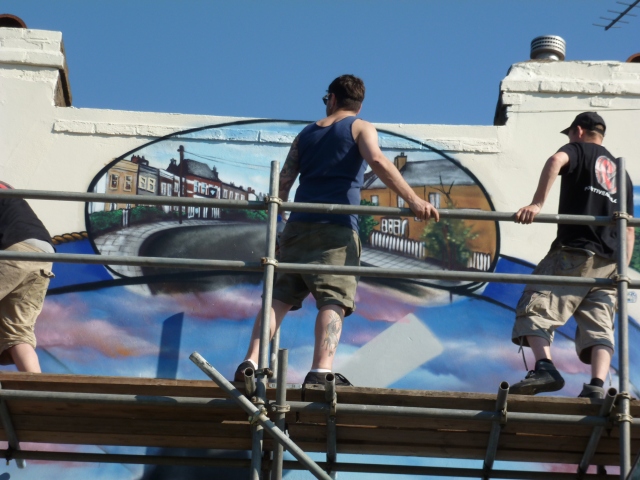 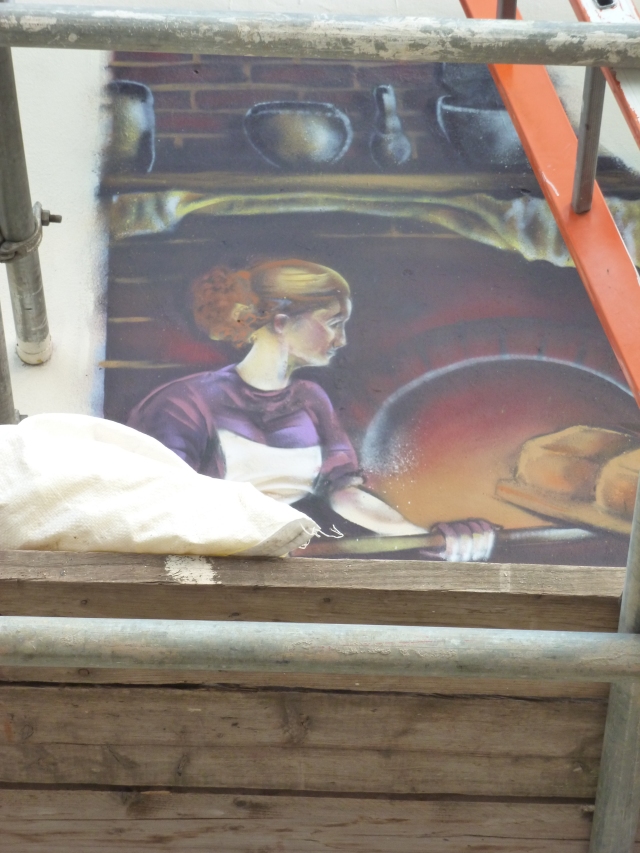 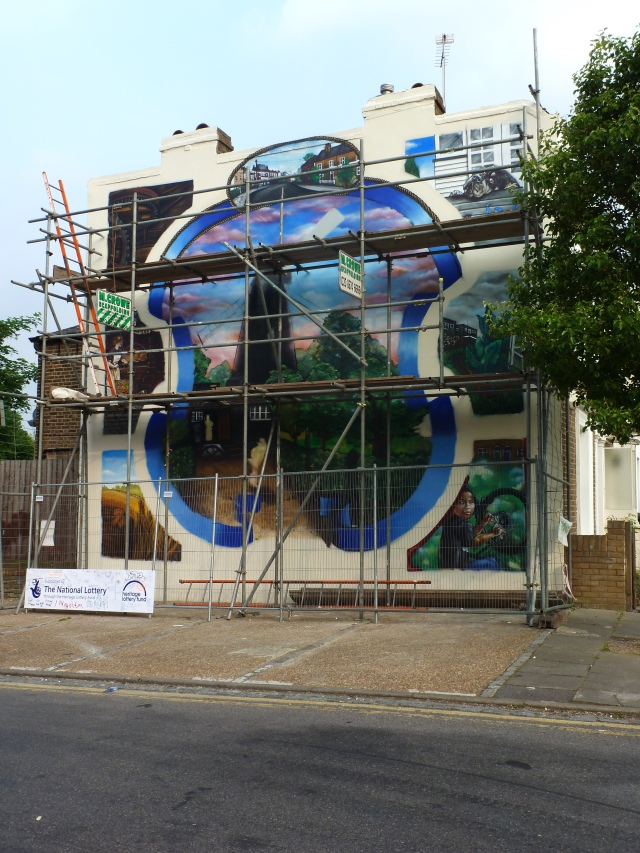 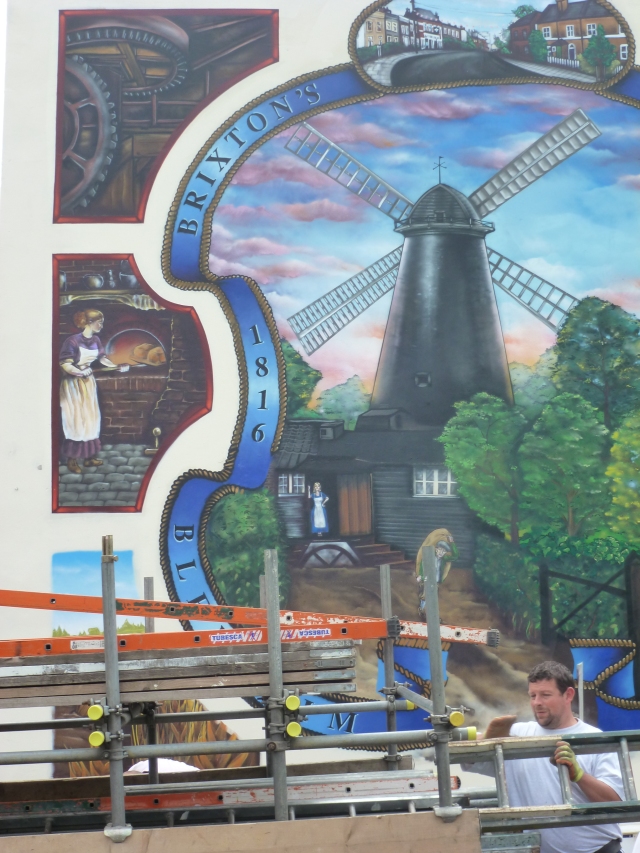 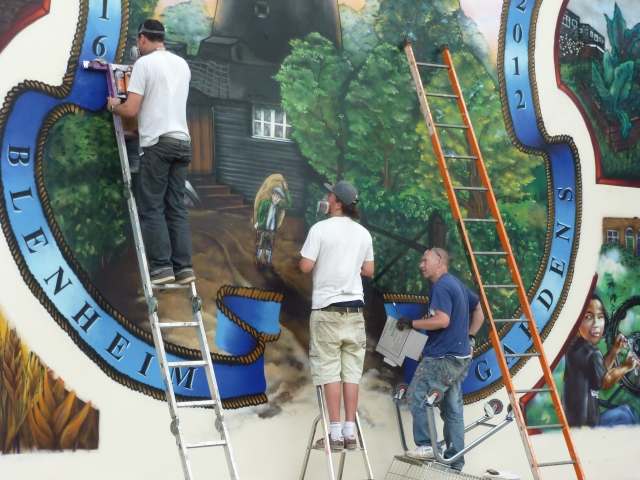 The camera crew are still here. 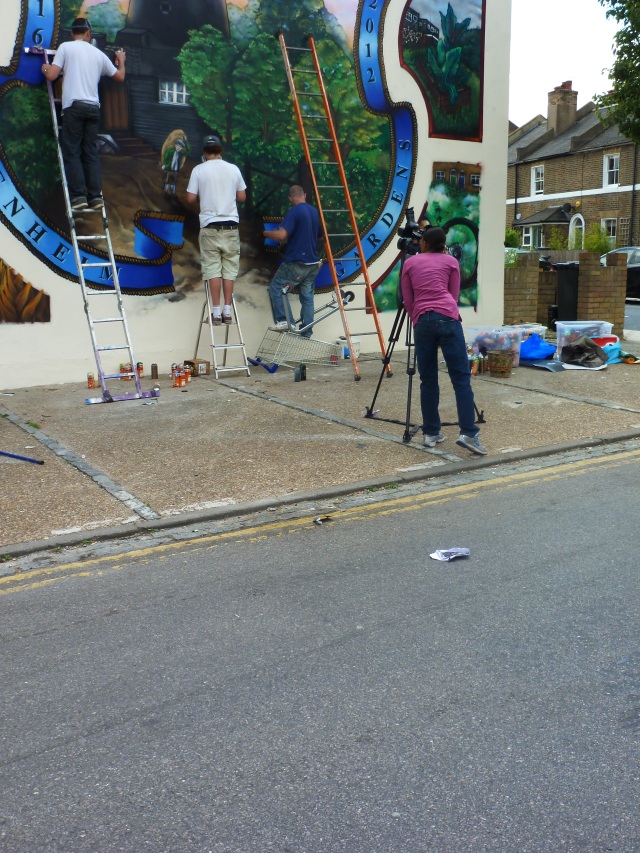 The day of the unveiling! 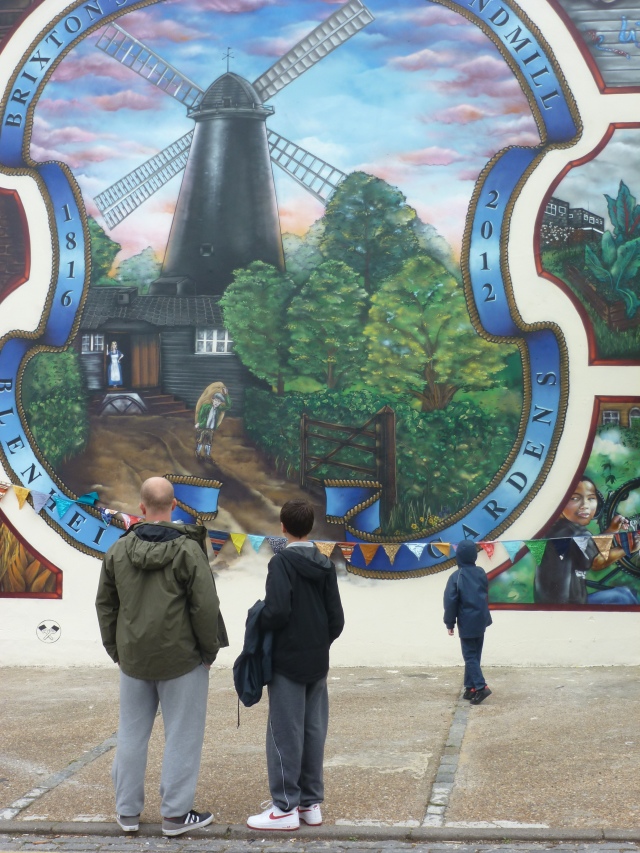 Brian Barnes, Muralist, does some artwork with the children. 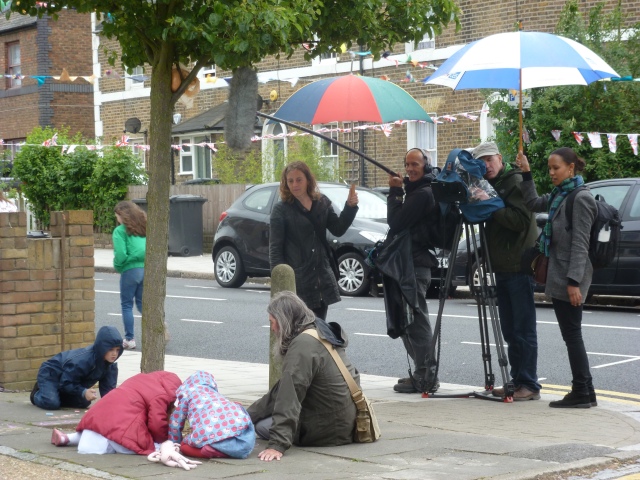 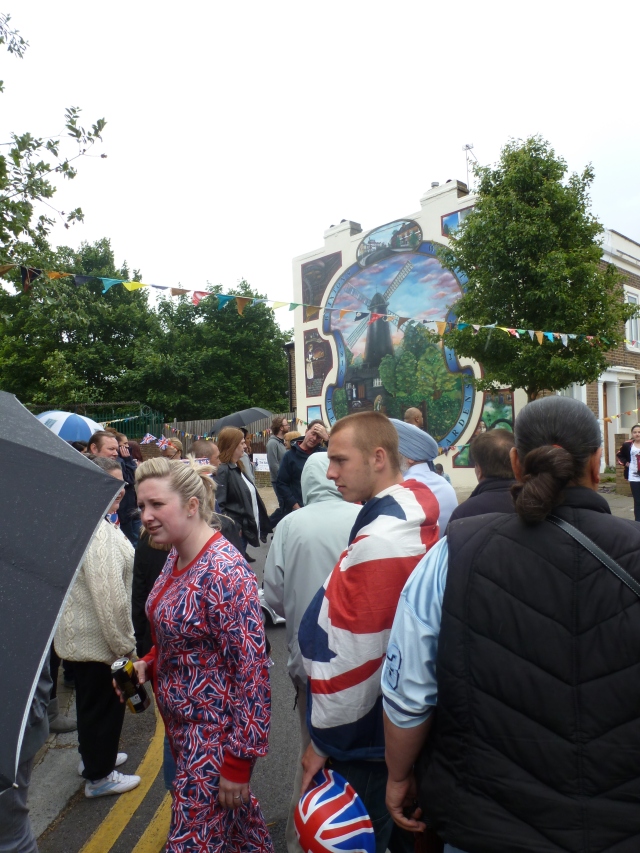 Fire engine pays a visit but we have a bunting problem! 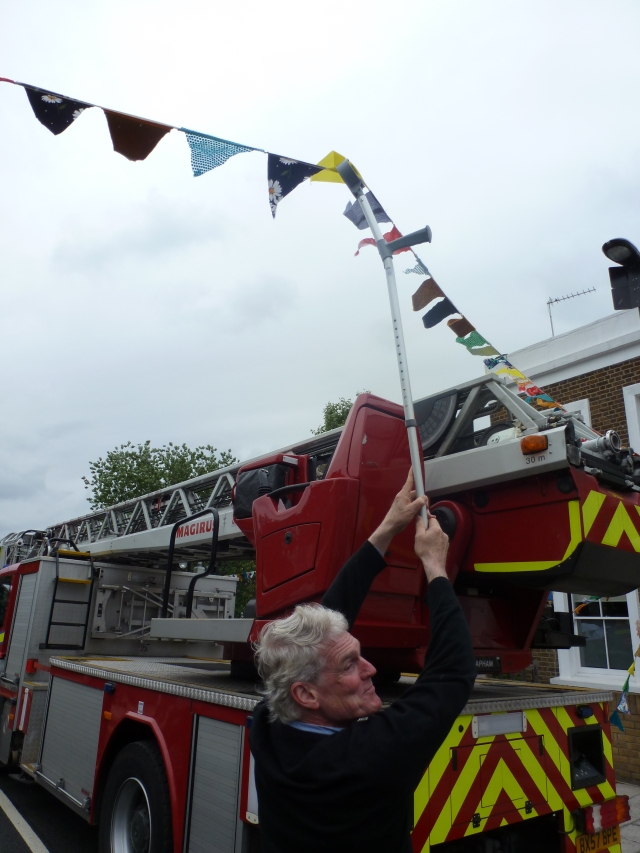 Rescuing the bunting by climbing trees! 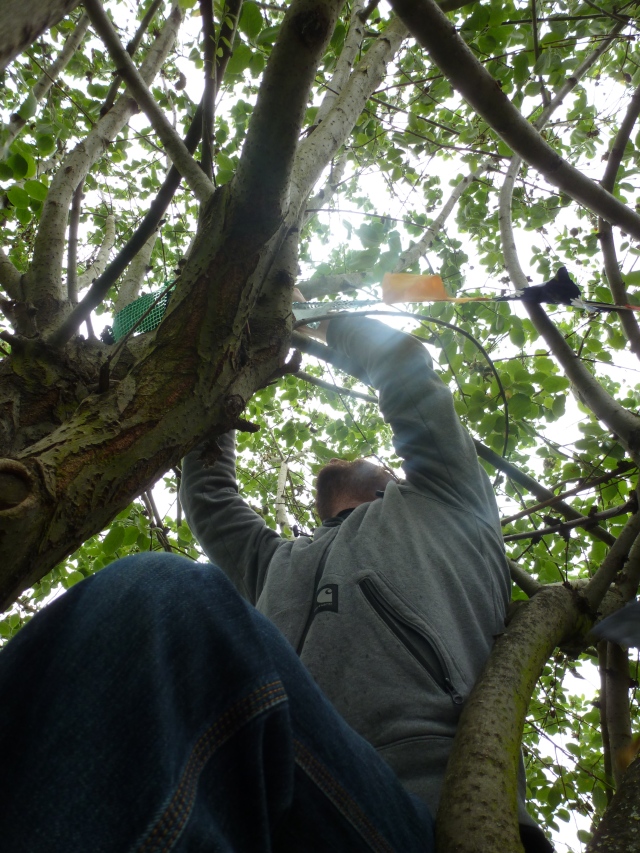 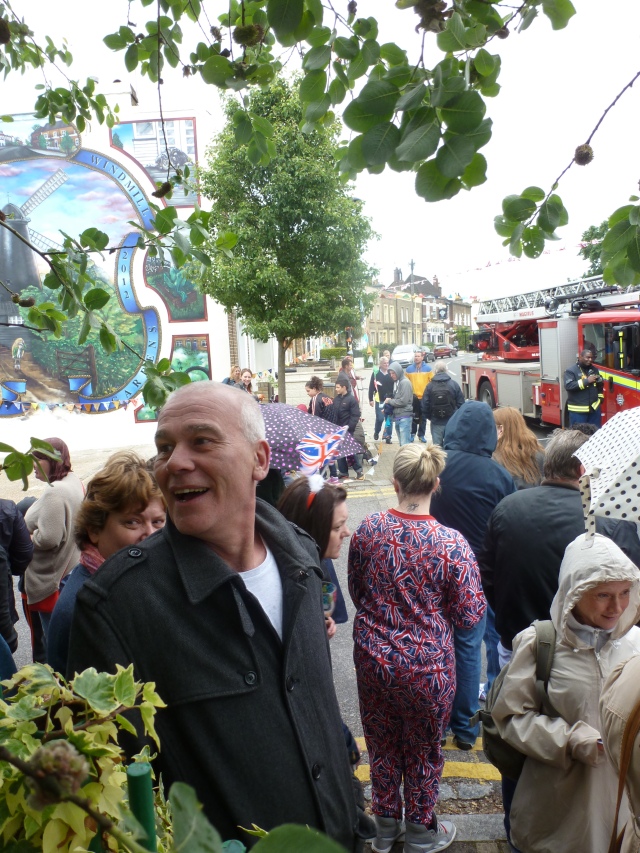 The children and the grownups love the fire brigade’s elephant mascot! 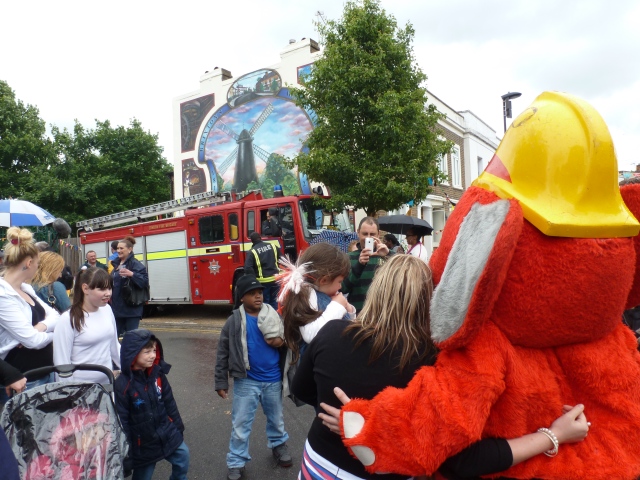 An introduction to the mural! The fire engine masks the mural to provide the unveiling! 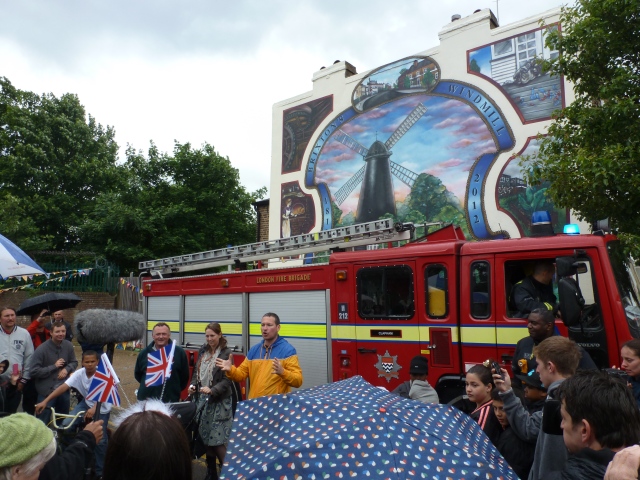 The guys from Positive Arts (and Vinnie and Jason) 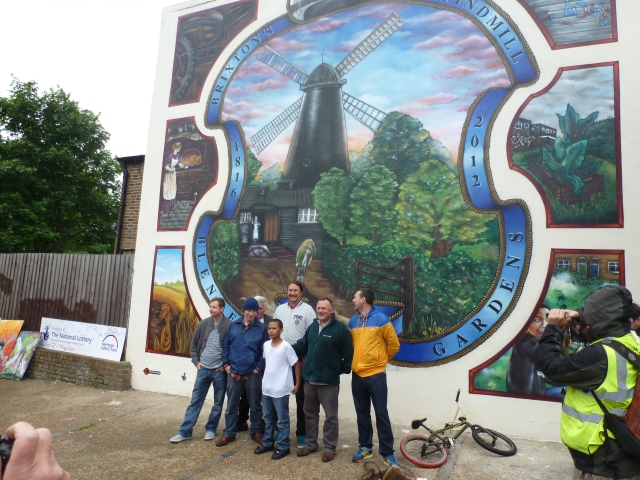 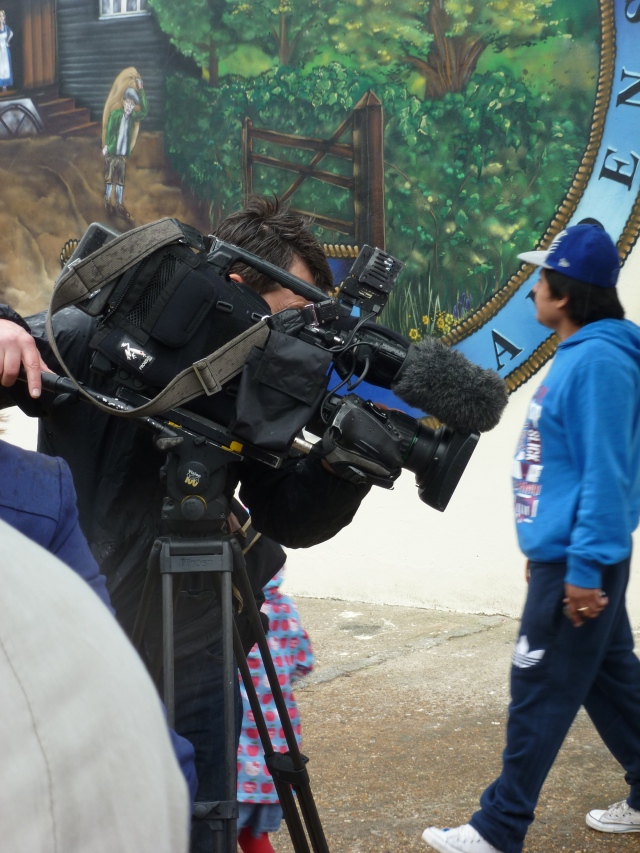 Brixton celebrates even when it is raining! 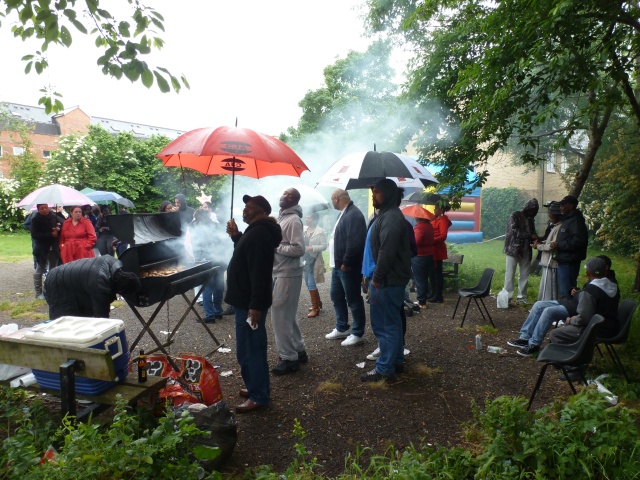 So as you can see, that’s the story of how the mural was painted in the sunny sunshine!

A huge thank you to all the local people who worked on the mural and  a big thanks to those who came down from outside of the Brixton area to offer their support and cheer on the workers!

Also thanks to Vinnie O’Connell, Positive Arts, Clapham Film Unit and us at the London Mural Preservation Society. One mural done…. many more to go!

The London Mural Preservation Society aims to bring murals created over the last 40 years back into the attention of the people of London and out further afield into the rest of the UK and the world.
View all posts by londonmuralpreservationsociety →
This entry was posted in Brixton Windmill Mural Restoration, London Mural Preservation Society, Restoration and tagged Brixton, Brixton Windmill, Clapham Film Unit, Lambeth, London, Mural, Positive Arts. Bookmark the permalink.